When, Where and Why do Emperor Penguins Migrate 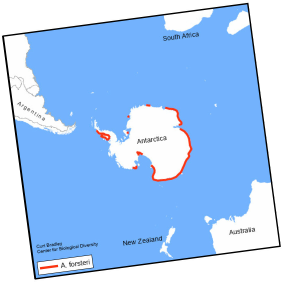 When, where and why do emperor penguins migrate? Emperor  penguins migrate to reach a breeding ground. They migrate during  the month of March. The emperor penguins travel 60-100 miles inland to their designated  breeding sites. All of the colonies go to the same place and arrive around the same time. They start in the beginning of March and the migration should  end by the end of March. They always take a different path because the ice shifts and places new obstacles in their way. When they arrive the females will lay an egg and then  pass it on to their husband. Their husband will take care of the egg for the  next 4 months while the females are of feeding in the sea. When the first eggs start to hatch, in August, the females return and the males go of to feed in the  sea. Then , before the males return, the females will leave their chicks and travel to the ocean to feed. When the males arrive they will listen for their chicks call and then feed them. Over the next few months the parents wil take turn traveling to the sea and feeding the chick. Then, after 9 months, the parents will return to their homes leaving the chicks at the breeding ground. The chicks will stay there for a few more weeks before diving into the ocean. They will live there for the next 4 years and on their fith year they shall migrate as their parent did.
Back to Home
Powered by